The Sunshine Coast Ocean Regatta (SCOR) is set to take place off Mooloolaba between 13 and 15 October with a strong field from across Queensland and the rest of Australia vying for sailing glory. This is ‘The Gambler’s’ story- the 1984 SCOR winner.

The Gambler has clocked up a fair few nautical miles over the past three decades, but in 1984, the yacht was indeed ‘state of the art’. The Farr 40 IOR yacht was built for Ian Kenny and launched just in time for the 1984 Sunshine Coast Ocean Regatta (SCOR). With only one outing under her keel prior to the event, which resulted in her main sail becoming stuck when the halyard jammed, The Gambler set forth bravely amidst the throng of seasoned sailors seeking the coveted SCOR winners’ trophies. Much to Ian’s delight The Gambler won the first three races and performed strongly enough in the rest of the series to be crowned overall winner of the Regatta.

Having started sailing keelboats in the early ‘70’s, Ian says he enjoys the challenge of getting the most out of the hull and sails, and has shown his skills with a string of victories including five firsts and two seconds in Division 1 in the seven Brisbane to Gladstone races between 1985 to 1994, a first, three seconds, a third and two fifth in the overall placings, Queensland IOR Champion in 1984 & 1985, and winner of the IOR South Pacific Offshore Championship in 1987.

Unfortunately, the 1984 Sydney to Hobart race was a gamble too far for The Gambler, as Ian Kenny recalls: ‘It was a particularly bad race in terms of weather with only 46 of 151 competitors finishing the race in Hobart. The race started in reasonable but brisk conditions. We were sailing to windward in company with ‘Indian Pacific’ our sister ship and the eventual handicap winner. Late in the afternoon we split tacks with them. They continued SE and we tacked back to the SW.

Shortly after start of '84 Sydney to Hobart

“The windward seas continued to build and later in the evening the seas were significant. We had tacked back to the SE when we were hit by the rolling white water on top of a particularly big wave and together with the exposure to the breeze at the top of the wave; the boat was laid down with the mast in the water. Fortunately she got herself up again and we were able to press on.

“Later on the second day the main sail let go and hence we elected to retire pulling the mainsail off and headed back towards Sydney.

“We had the number 4 head sail up and were now sailing down wind. The boat seemed comfortable enough. We were surging up to about 15 knots on the face of the waves and about 8 knots on the back.

“With a day or so back to Sydney we settled down on board. There were 10 in total on board with 8 down below and 2 on deck. The ride was not particularly pleasant but not alarming.

“At about 3.00pm the boat broached and rolled 180°. I was down below and I remember saying ‘what happened?’ and one of the guys said we’ve rolled over. I didn’t reply as that was very evident!

“We then learnt an interesting lesson in that an IOR boat completely inverted with a low stability keel and the mast under water is quite stable in that configuration.

“I suggested that we move to one side within the boat to destabilize her which resulted in her coming back up quite quickly. The guys on deck had been tipped into the water with one being scooped back into the cockpit on righting. The other was at the stern and I was able to pull him back in. The boat was half full of water with the mast broken above the first set of spreaders.

“I grabbed the tiller and discovered that despite everything the boat was being driven downwind and was able to be steered.

“We cut the forestay and shrouds and the mast went over the side. We elected to leave the mast trailing behind as a sea anchor.

“Initially we were very low in the water with waves washing over us. The boat was bailed out over the next couple of hours.

“The engine, radio and batteries were substantially under water, but to everyone’s enormous surprise, the engine started. We cut the mast away and motored to Port Kembla with the adventure over”.

Whilst The Gambler has an enviable overflowing trophy cabinet, after sharing 32 years with her, Ian believes his greatest achievement to be the introduction of many young people to sailing who went on to a develop a passion for the sport. His fondest memories come from the enjoyed camaraderie of the crews he has sailed with, which included his daughter Kate.

Ian says he understands the public and media fascination with the modern super yachts and their eye watering price tags, sky-high running costs and professional crew.

“They have incredible pace and the ability to hold onto a weather pattern whereas the rest of the fleet has to sail in the breeze that follows,” Ian says. “These yachts routinely finish races in half the time of the rest of the fleet and while there is nothing fundamentally wrong with this, a lot of the balance of the fleet sail equally as skilfully and over a much longer duration and are currently relegated by the media and hence the general public, to the category of “also rans” when they are very much not. Most of the hard fought competition occurs in this 90% of the fleet.

“In the 1984 Sydney to Hobart the entire fleet sailed under the much maligned IOR Rule. The rule itself promoted some distorted yachts, but a tweaking of the rule could have sorted that out. However at least you knew if changes were made to your boat what the outcome to the rating would be as it was laid out openly by the rules and clearly understood.

“We now race under the IRC rule. This is a secret rule where there is no understanding of how the rule actually works, and if your boat does not rate well, it is difficult to know how to rectify it. In our case we have to give between 2.5 and 3.5 minutes per hour to a number of sister ship Farr 40 IOR yachts, for no apparent reason.

“At Hamilton Island Race Week 2016, they conducted the Australian IRC Championships over 3 classes and attracted 29 IRC competitors in the IRC Championships and 166 mono hull entries on an arbitrary handicap basis. Whilst I have never been in favour of an arbitrary handicap, unfortunately, I would have to say that the IRC Rule is destroying yacht racing in Australia.”

Despite his unhappiness with current day rules, Ian’s love of sailing and his affection for The Gambler will never be lost. 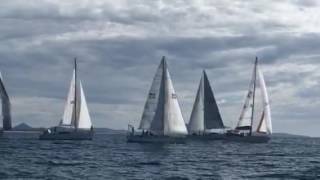 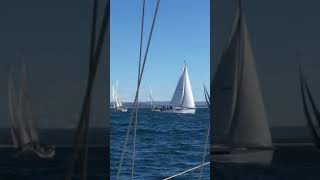